*I was approached from Speck Ham to try their product for free and give my honest opinion. I was not financially compensated for this post.

This simple Roasted Brussels Sprouts with Speck Ham and Balsamic Glaze Recipe is a tasty gourmet treat! The salty smoked ham and the sweet balsamic glaze perfectly compliment the nutty flavors of the roasted Brussels Sprouts. After one bite, this recipe will become one of your favorite side dishes for many of your future meals.

As a child I hated Brussels Sprouts. My mother was very firm with us when it came to eating our vegetables. My brothers and I were not allowed to leave the table until all of our vegetables were finished off our plate. The mere sight of the green, leafy, mini cabbage like veggies made me want to throw up.  I would gag. My mother would say, "You are still going to eat them. I don't care if they make you sick." I would challenge her by sitting at the table, FOREVER and EVER just glaring at my plate and making ugly faces at her. This could go on for hours. They would become miserably cold. But she never budged. And so, I would eventually plug my nose and try to down the little green veggies, praying they would quickly settle in my stomach.

My mother forced me to try lots of things I didn't want to. I am thankful she did as I have become an adult. I LOVE all sorts of foods and I am not one bit picky now. I will try almost anything. I have also grown to have a deep fondness of Brussels Sprouts. They are one of my favorite vegetables. I can't imaging why I ever hated them. Perhaps because my mother never roasted them and added the amazing Speck Ham and a balsamic glaze? Perhaps if she did, I would have liked them as a child too? Hmm…

I was approached by Speck Ham to try their product for free and give my honest opinion. So let me tell you about this Speck Ham or Speck Alto Adige PGI. If you are a serious foodie then you must try this ham!!! It is ridiculously amazing and probably the best smoked ham you will ever, ever, ever eat!!!! It is similar in taste to a proscuitto or a pancetta with a more intense smokey flavor. This distinctive little smoked ham is made in South Tyrol, located in the Northern part of Italy. It has a lovely, mild smokey flavor with hints of sweetness and a rich flavorful seasoning. This Italian Ham is  created under traditional methods handed down through generations, by "combining the Northern European method of preserving raw ham by smoking it, with the Mediterranean practice of outdoor curing."  The result is PERFECTION!!!! Honestly, with the first bite it was an "OH MY GOSH!" moment in my mouth.

My package was a pound and a half. This will actually go a long way. I will be creating three dishes from my one package. If you sliced it very thin, it could be used like a proscuitto with a bit of a more intense flavor. You could serve it with a platter of cheese and olives and you would have an amazing Antipasto. How easy is that? If you wanted to slice it and dice it, you could use it like you would with a pancetta or crumbled bacon. Just crisp it in a pan to bring flavor to any dish.

And so I sliced it and diced it to make my Brussels Sprouts from boring to AMAZING!!

I cut my Brussels Sprouts in half, tossed them in olive oil, and added salt and pepper. Then I tossed in my diced Speck Ham. Made my balsamic glaze while I roasted them bad boys in the oven until they became a little crisp…

And BAM!! Magic in the kitchen!!! My husband said, "Keep plating it up!"

Perfection folks… Pure perfection. So now please excuse me while I go back for thirds! xoxo!

If you would like to learn more about Speck Ham or Speck Alto Adige P.G.I. check out there website here. I promise you will love it, and when you do, I told you so!

If you like this recipe, check out: Jalapeño, Cilantro, and Lime Brown Rice, Granny Moore's Dressing, and Healthy Feta Quinoa Salad. 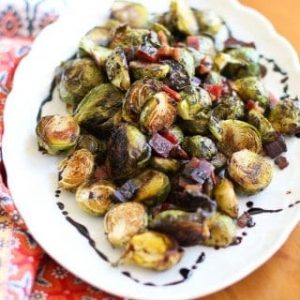 Nutrition- Nutrition info is based on estimation only.

Leave a comment and let me know what you think! Cancel reply