Paulie's Pig Out is located in Afton, Virginia. They are famous for their smoke Boston butts, dry rubbed ribs, and smoked chicken. Rumor has it that they are the best place for barbecue in the Nelson and Albemarle Counties; perhaps even the whole state of Virginia. If you are on the Rockfish Valley Highway, you must stop at Paulie's Pig Out for a bite to eat! 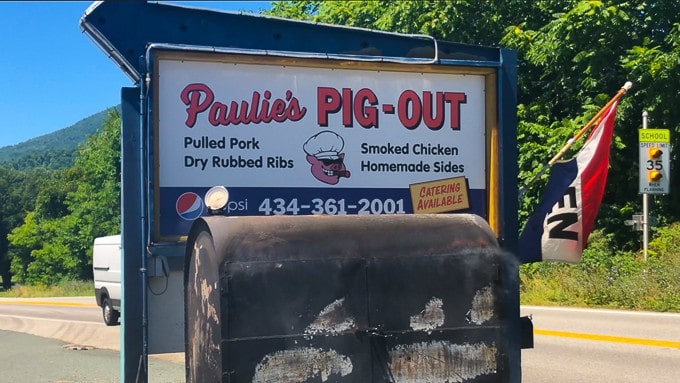 We drive to see family in Pennsylvania yearly and take the back route to avoid the traffic. My favorite part of the drive is the glorious scenic Rockfish Valley Highway. Big blue skies and rolling mountains covered in rich green surround you with the most beautiful country setting. Along the road you pass several little wineries, a couple breweries, and even a distillery. Afton, VA is on my bucket list for a short weekend getaway.

While driving those curvy, windy roads, a little barbecue shack caught my eye; and I knew I had to make a stop. It's a small, vintage, whimsical sort of restaurant with a smoke cooker out front working hard on smoking ribs and Boston butts. Once an old gas station with bathrooms still on the side of the building, it is now one of the best places to stop in Virginia for real, home-style barbecue.

Watch this video for Paulie's Pig Review and interview with Paulie:

Rich smells of smoked meat overwhelmed our senses as we hopped out of our car. Groaning stomachs were rumbling as we entered through a squeaky little screened door to approach a small counter. This is where you placed your to-go order. Paulie's Pig Out is a take-out only restaurant, but there are picnic tables on the outside should you decide to stay and eat to enjoy the mountain views.

Paulie's Pig Out offers a small menu of pulled pork, dry rubbed ribs, smoked chicken and country sides. While the menu is small, the portions are not. Customers say the mac and cheese is tasty, but we decided to go with the coleslaw and baked beans. My husband ordered the bbq sandwich and I ordered the smoked chicken. 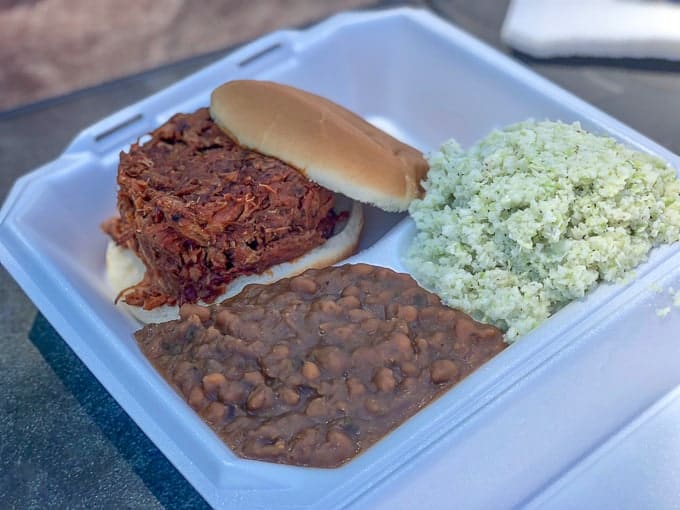 Paulie's Pig Out pulled pork has a deep smoky richness mixed with a sweet tomato based bbq sauce. It is tender, juicy, and moist. The pulled pork is very different from the vinegar based bbq we are familiar with in the Carolinas, but we loved it just the same. This is some barbecue you don't want to turn down. The slaw is southern perfection. It is made just like my husband's grandmother made hers. Our granny, a very particular kind of lady, would have loved it. (It is Paulie's grandmother's recipe!) The slaw is chopped fine with mayo, cabbage, sugar, and a little salt and pepper. It was splendid topped over that bbq because that is how we southerners eat ours. The baked beans are served sweet and flavorful. To say we are impressed is actually an understatement. 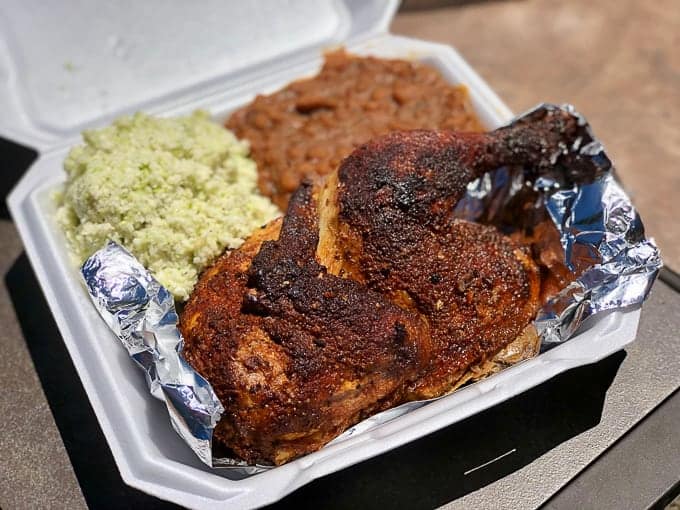 Now let's talk chicken. Dry rubbed smoked chicken is not usually my thing. Fried chicken and barbecue chicken are normally my preference. However, my husband ordered the barbecue and I knew I could try some of his. Consequently, I wanted to order something different off the menu. The ribs looked FANTASTIC, but they looked a bit to heavy for my appetite. Instead, I ordered Paulie's Pig Out smoked chicken.

As of 2018, Paulie's Pig Out has been around for 8 ½ years. In search of a job and unable to find one, Paulie decided to take this run down gas station building and convert it into a bbq joint. His 88 year old father built his cookers out of old oil tanks. He learned to cook from his grandmother and uses her recipes for all of his food. He slow smokes his meat and serves it with great pride. Paulie's Pig out is located on 7376 Rockfish Valley Hwy, Afton, VA 22920. Be sure to stop in hungry and tell them that A Fork's Tale sent you. You won't be disappointed.

Do you love barbecue as much as me? Then check out some of these posts: Parker's BBQ, Pik-N-Pig, and B's Barbecue.

Leave a comment and let me know what you think!