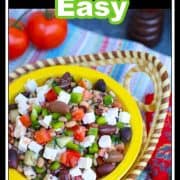 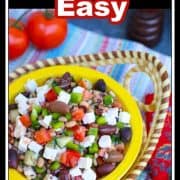 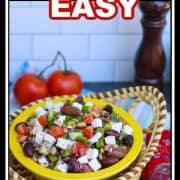 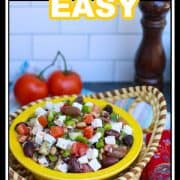 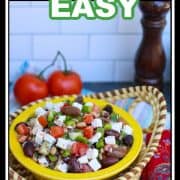 It is tossed in a delicious homemade Greek dressing.

Make this salad for a light meal or serve it as a delicious side dish.

It also makes a tasty stuffing for a pita sandwich or wraps.

To make this tasty Greek black-eyed pea salad, you will need the following ingredients:

Watch video on how to make

Follow these steps to make this black-eyed pea salad.

I was dining at an amazing Mediterranean restaurant called The Lazy Goat in Greenville, South Carolina.

They had a Greek black-eyed pea salad on the menu.

The name of the salad was "Lazy Man's Greek Salad."

I was so intrigued by the name, I had to order it.

I had never had the Black Eyed Peas mixed with the fillings of a Greek Salad.

I wasn't sure why it was called the "Lazy Man's Greek Salad."

It is quick and easy to throw together.

Maybe that is why it is the Lazy Man's salad?

While the restaurant's name for the dish was really cute, I decided to take on the more boring name of Greek Black Eyed Pea Salad.

I didn't want my recipe to be lost in the world of Google Search....

Regardless of my perplexity, the "Lazy Man's Greek Salad" was tasty enough to go home and try to recreate myself.

I could eat this stuff by the bowl fulls. I hope you enjoy it too!

Please leave me a comment below if you make this Greek black-eyed pea salad recipe and tell me what you thought about it. I would love to hear back, and so would my readers. 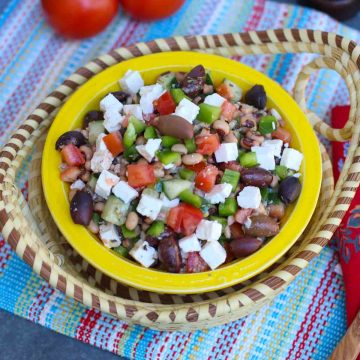 Nutrition- Nutrition info is based on estimation only.